China accounts for 44%! Nearly 1.2 million employees in the global wind power industry in 2018

According to the latest Renewable Energy and Employment-Annual Review, there were approximately 10.3 million people employed in the renewable energy field in 2017. As more and more countries manufacture, trade, and install renewable energy technologies, despite the slowdown in the growth of major renewable energy markets, including China, renewable energy jobs still reach the highest level. 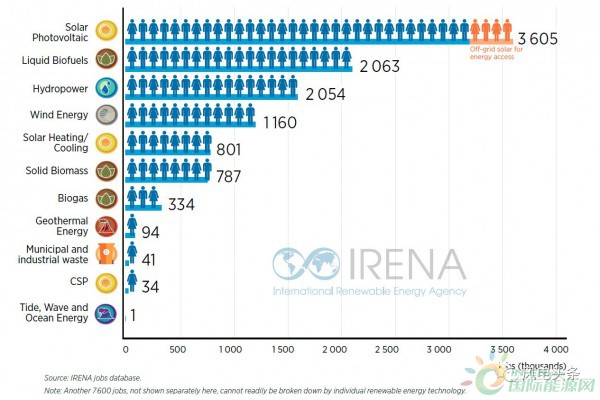 Among them, in the wind power industry, onshore wind power occupies a dominant position, accounting for the vast majority of 1.2 million jobs in the industry. China alone accounts for 44% of global wind energy employment, followed by Germany and the United States. In order to increase domestic production capacity and take advantage of the synergy with the oil and gas industry, offshore wind power may be a particularly attractive option. At the same time, offshore wind power gains new development impetus, which can be built on the expertise and infrastructure of the offshore oil and gas sector.

Solar photovoltaic (PV) and wind power are still the most dynamic of all renewable energy industries. The solar photovoltaic industry accounts for one-third of the total renewable energy workforce and maintained its leading position in 2018, ahead of liquid biofuels, hydropower, and wind power. At the same time, geographically, Asia has more than 3 million photovoltaic industry jobs, accounting for nearly one-ninth of the global total.

In addition, in 2018, the number of photovoltaic jobs in India, Southeast Asia and Brazil increased, while many people in China, the United States, Japan and EU countries faced unemployment.

The increase in production has promoted a 6% increase in biofuel employment to 2.1 million. Brazil, Colombia, and Southeast Asia have labor-intensive supply chains where informal work is very important, while operations in the United States and the European Union are more mechanized.

Hydropower has the largest installed capacity of all renewable energy sources, but it is now slowly expanding. The department directly employs 2.1 million people, three-quarters of which are in operation and maintenance.

Francesco La Camera, Director General of IRENA, said: "In addition to climate goals, the government has made renewable energy a priority to promote low-carbon economic growth to recognize the many jobs created by the transition to renewable energy. Renewable energy achieves the environment. , Economic and social sustainable development. With the strengthening of the momentum of the global energy transition, this employment situation has strengthened the social dimension of sustainable development, and also provided sufficient reasons for countries to continue to invest in new energy."